Bishop Ferd is a Franciscan Friar of the Sacred Heart Province (St. Louis) and has been ordained for 37 years. He has served at Our Lady of Lourdes Church, New Orleans; St. Joseph the Worker, Marrero, LA; St. Francis de Sales, NO; and St. Vincent de Paul, Nashville, TN. He taught at St. Augustine High School, NO; Hales Franciscan HS, Chicago; and at Althoff Catholic High School, Belleville, IL. He was an assistant Campus Minister at Xavier University, Director of Campus Ministry at Quincy University in Quincy, IL; and now is auxiliary bishop of New Orleans.

He received his Masters of Divinity degree at Notre Dame Seminary, New Orleans and a Masters of Theology degree at Xavier University of Louisiana, New Orleans. He wrote his thesis, “Songs of the Soul and the Soil,” the history of Black Religious music. He is an archivist of Black religious music with a collection of 4,000 recordings of gospel music and files of gospel sheet music and books. He is the editor and compiler of the 7-volume 1994 Gospel Music Discography and the 9-volume 1997 Gospel Music Discography. He wrote an article, “Black Catholic Liturgy” in TELL IT LIKE IT IS, a Black Catholic catechetical book in 1982. He also wrote “Mass of Thanksgiving” in FREEING THE SPIRIT, a Black Catholic liturgical magazine, Spring 1979. His latest achievement is being the contributing author to the book, SWEET, SWEET SPIRIT: Prayer Services from the Black Catholic Church, in 2006.

Bishop Cheri has served as a member of the liturgical planning committee for the National Black Catholic Congress in Chicago 2002; the planning committee for Unity Explosion 1991 in New Orleans; the Bishops’ Committee on the Liturgy Subcommittee on Black Catholic Worship 1984 to 1990; the National Joint Conference of Black Catholic Religious Planning Committee 1983-1990; and the Black Catholic Theological Symposium 1978. He works with the Lyke Liturgy Committee for the Archbishop James P. Lyke Liturgical Conferences; and was chairperson of Lyke Conference 2005 in St. Louis. Now he is a member of the Lyke Foundation, dedicated to the development of Black Catholic Worship. He began the Youth Gospel Choir at Our Lady of Lourdes, NO, LA; the St. Joseph the Worker Youth Choir, Marrero, LA; the Althoff Gospel Crusaders, Belleville, IL, and the St. Augustine of Hippo Youth Gospel Choir, East St. Louis, IL. He began and directed the Black Saints Celebrations for the Archdiocese of New Orleans from 1984 to 1991. He has been a presenter on Worship for Black Catholics at the National Black Catholic Congress’ “Pastoring in Black Parishes” Workshop. He served as a member of the Diocesan Liturgical Commissions of Nashville, TN and of Belleville, IL. He is the convener and facilitator of Go Down Moses Retreats for African American Catholic Young Men and has worked with KUJENGA Youth Leadership Programs in Chicago and the St. Louis/Belleville area.   He is a revivalist, preaching across the country. His strength and testimony comes from God’s Word in Scripture, “My grace is enough for you, for in weakness power reaches perfection.” (2Cor 12:9) 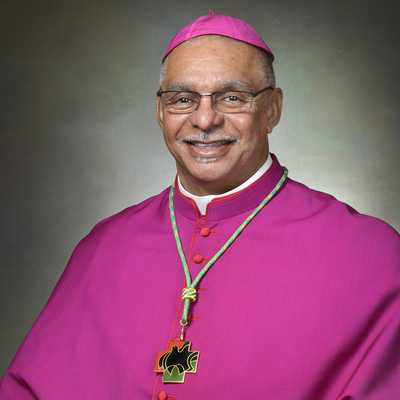